By the end of the year, there will have been a total of nine Stephen King adaptations, from the witless and distasteful The Mist; the competent thriller Mr. Mercedes; as well as the critically savaged opener to The Dark Tower saga, and the upcoming Gerald’s Game. Since Carrie started petrifying audiences in 1976, it’s the most adaptations of King’s work in a single year. Perhaps best of this year’s conversions of page-to-screen is Andy Muschietti’s It, a grisly reimagining to usher in a new generation of coulrophobia.

On a violently stormy day in 1988, Georgie Denbrough (Jackson Robert Scott) goes missing after a graphically alarming encounter with Pennywise the Dancing Clown (Bill Skarsgård) after losing a paper boat made for him by his brother Bill (Midnight Special‘s Jaeden Lieberher). Those familiar with King’s tome and the ABC miniseries from 1990 won’t find this opening much a surprise (apart from the 1950s to 1980s era-shift), but what is startling is the way in which Muschietti and writers Cary Fukunaga, Gary Dauberman and Chase Palmer introduce something notoriously familiar as something terrifyingly new. These thanks are in no small part to Skarsgård’s chilling storm-drain introduction of the terror made iconic by Tim Curry. 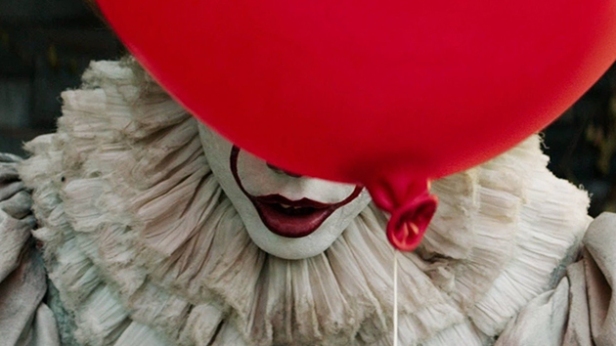 Though Curry’s mystical embodiment of Pennywise startled a generation with a perfectly sinister “Hiya Georgie!”, in the near three-decades since release, his effect of his incarnation has lessened into a more theatrical, giddy villain. Skarsgård’s Pennywise, however, feels like a more commanding contemporisation of evil and the essence of insidious cruelty. As he rattles off phony pleasantries toward Georgie with an eerie twitch of the neck and a trickle of drool, he’s certainly more of a clear-cut monster than Curry, and there’s more horror to be found in his perverse giggling as he’s first seen deceiving a young boy to an unpleasant death.

A lot of the It‘s success depended on the camaraderie of its young cast, and thankfully, the cast of youths pull their weight, capturing the vibe of the late 1980s with their quest for free-spiritedness at the start of school-free summer. The friends – soon referring to themselves as The Losers Club – include Bill, whose school break takes a sombre tone as he searches for Georgie; compassionate Beverly (Sophia Lillis); crude, cocky Richie (Finn Wolfhard, perpetually trapped in the 80s); bookish Ben (Jeremy Ray Taylor), gutsy Mike (Chosen Jacobs), pragmatic Stanley (Wyatt Oleff) and neurotic, coddled Eddie (Jack Dylan Grazer). With such numbers in the main cast, there’s undoubtedly going to be extra time favoured to the core characters, but this is more frustratingly the case with the one-dimensional adult personalities who manifest as caricatures rather than authentic townsfolk: there’s Stephen Bogaert’s hackneyed turn as Beverley’s abusive father, Molly Atkinson’s restrictive, obese mother (whose weight was primarily introduced for a nasty, unnecessary punchline) and Nicolas Hamilton’s practically psychotic school bully Henry. Where The Losers Club each feel like they have a fleshed-out narrative, each of the aforementioned adults struggle to emerge from their shallow characterisation, often hobbling a scene and bringing one of the few moments of tension to a screeching halt. 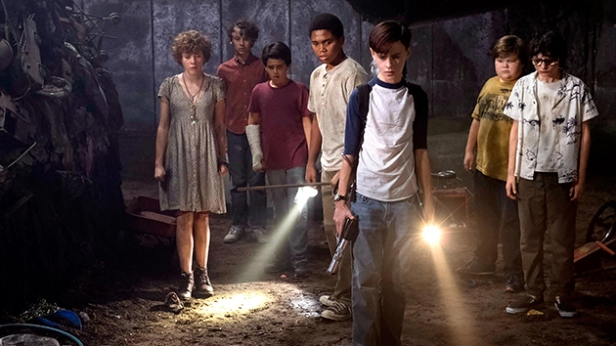 As is analogous with every big name horror feature, It still can’t help but fill its quota of blisteringly irritating jump scares. Moments like the headless visage on the library stairs, or the inhuman way in which Pennywise propels through water would have worked as effectively without the screaming, howling audio, but there’s also enough background creepiness and ghoulish images to balance out the clattering noises. Surprisingly too, in spite of there being some wickedly inspired set-pieces (in particular the first showdown in Neibolt Street’s dilapidated house; or the rotary projector’s gargantuan reveal etc.), there’s a clear lack of tension throughout, and this is largely because of ever-looming threat of a jolting, ear-splitting screech. What It does succeed in, though, is some legitimately disturbing imagery: including young cast members with graphic wounds and severed limbs and ghastly images of Pennywise’s panicked metamorphosising, there’s truly no shortage of scenes to feed the nightmare fire. So while adopting the lazy route of jump scares makes It much less scary than it ought to be, its creeping persistence to making your skin crawl makes it undoubtedly more terrifying than its current peers.

It’s been a long time that I’ve been able to overlook narrative flaws and one-dimensional characters in a horror movie, and I generally disagree with the current consensus (the likes of The Witch, The Invitation, and The Babadook contained greatness, but ultimately bored me into a stupor) but It makes up for these unmistakable cracks with a genuinely compelling and often seriously grotesque commitment to its horrors, as well as an astute approach to the allegorical subtext of looming teendom and the dominion over fear and loss. Here’s hoping Muschietti and co. cast a capable group of adults as the grown-up Loser’s Club, and takes a clever approach to grounding the ludicrous interdimensional plots for Chapter Two. We deserve it.