Steven Spielberg is, without question, one of the most important directors/producers in the history of film. Ask anyone, and one of their favourite films will almost certainly have been made by the titan of cinema: from early thrillers of Duel and The Sugarland Express, leaping through science fiction with unrivalled success, and creating some of the most well-known heroes (Indiana Jones) and villains (Bruce the shark in Jaws) in film history. There’s absolutely no doubt about his visionary achievements, his influential in production and styles, and his inspiring to change the face of this storytelling medium.

In Catch Me If You Can, fresh-faced Leonardo DiCaprio – as real-life con artist, cheque-forger and imposter Frank Abagnale Jr. – is at his most breezy and animated than ever before (and since), and this playful nature effuses from every moment of impish deception and escape from the clutches of diligent FBI agent Carl Hanratty (Tom Hanks). Impacted by the divorce of his father (Christopher Walken) and mother (Nathalie Baye), Frank Jr. flees, soon running out of money needed to get by in 1960s New York. Recalling his father’s scams against the IRS, Frank starts to slowly impersonate others: conning becomes a staple of his everyday life and eventually – and foreseeably – this soon snowballs into something much bigger than himself. After a brief moment of immunity, the cat-and-mouse chase begins. 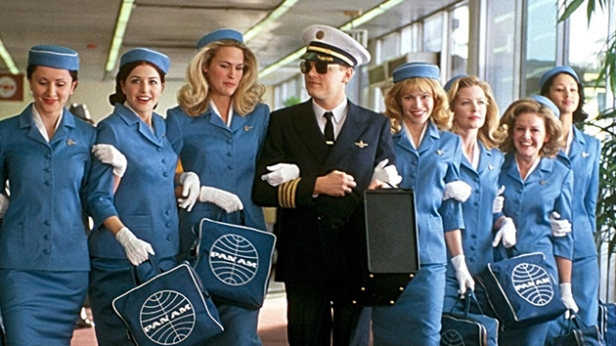 Spielberg recaptures a sense of boisterous fun that was missing from his previous decade’s work (to no disservice to them), creating a true-to-life crime caper that’s as light-footed and giddy as it is sincere and compassionate. It’s a semi-serious subject: one built on a foundation of fraud, extortion and falsehoods, handled in a light-hearted way that still gets across the substance and the severity of Abagnale’s situation without tipping either off balance. Spielberg brings plenty of his stylistically distinct qualities to Catch Me If You Can‘s proceedings: a smattering of globetrotting adventure, an oedipal father-son relationship, a colourful (but not flashy) observance of Americana, and a superb attention to period detail.

Set in the 1960s, Catch Me If You Can looks and breathes the part of the period with which Spielberg is so clearly in love with. Starting with a quintessentially Saul Bass-style title sequence (snappily similar to the graphic designer’s iconic preludes to Ocean’s 11 and It’s A Mad, Mad, Mad, Mad World), the tone is set within seconds with a jaunty musical pairing from superlative composer John Williams: rich blues and vivid oranges playing backdrop to the silhouetted figures that play out the story to a cheeky minimum. It’s a wonderful opener that sets the stage and tone thoroughly, encapsulating the delight to come. Spielberg (himself a teenager in the 60s, closely beating the real Abagnale Jr.’s age by a two-year window) and his team have a clear understanding of the era’s fashions and trends, using a delicious pastel colour palette and captivating set decorations (created by Claudette Didul – set decorator for Mad Men – and the prolific Leslie A. Pope) alongside excellent wardrobe and decade-specific character details. All of this makes the film feel like a true Hollywood production: a visual homage with environments and locations adding to the overall finish. 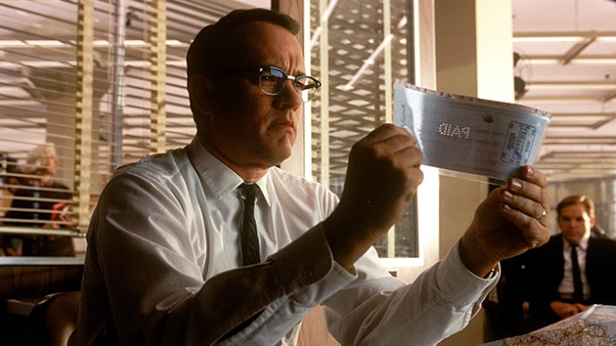 While I don’t think it’s close to being Spielberg’s best, there’s something to be noted about what he can create when he decides to completely cut loose and have unabashed fun. But, perhaps a lot of this fun would have been lost were it not for the terrific, faultless cast. DiCaprio oozes a necessary, smarmy charm in balance with his pretty-boy image, Hanks’ frustrated Bostonian agent is brilliantly realised with the actor’s natural talent, and Walken plays to his strengths: full of skittish verve, yet with a curiously offbeat heart. Even the smaller (yet no less vital) role from a young Amy Adams is note-perfect. Catch Me If You Can may not tell of a larger story, nor really dig in as deep as perhaps the previous attached directors would have (David Fincher – once attached – may have focused on the mental torment faced by Frank and Hanratty, whereas Cameron Crowe might’ve concentrated more on the father-son relationships) but it’s a hugely entertaining, gloriously thrilling chase that’s not only suitable for the Christmas season but is also perfect family viewing, and one that I can’t wait to watch again a few years down the line.