This week I’ve given my viewing time to modern seasonal films Krampus and The Night Before, instead of catching up those deemed classic by mostly everyone, so I sat down with Michael Curtiz’s romantic musical comedy White Christmas, and while it was sprinkled with many endearing moments, it was mostly a stuttering vehicle for the forgettable musical numbers and extended flaunting of dance choreography.

The first act spends a generous amount of time getting to know the comedy-dance routine of Bob Wallace and Phil Davis (Bing Crosby and Danny Kaye): two World War II soldiers who dream of making it big in the entertainment industry once they return from combat. Following an amusing montage to show their dream achieved – complete with spinning newspapers and animated dance numbers – we’re introduced to another all-singing, all-dancing duo: sisters Judy and Betty (Vera-Ellen and Rosemary Clooney). In this establishing of characters, we’re treated to an absolutely cracking script, with constant back and forth between best friends and sisters: repartee flowing from every mouth with a genuinely charming eloquence and silver-tongued sarcasm. Their wordplay sparkles and shines brighter than their careers. An example of this smart, quick-wittedness:

This is exhibitive of the entire script, characters come and go and interact in meaningful or transient ways, but all of them have their moment of charisma no matter how brief. The script keeps things fun, and moving along nicely, until the music starts. 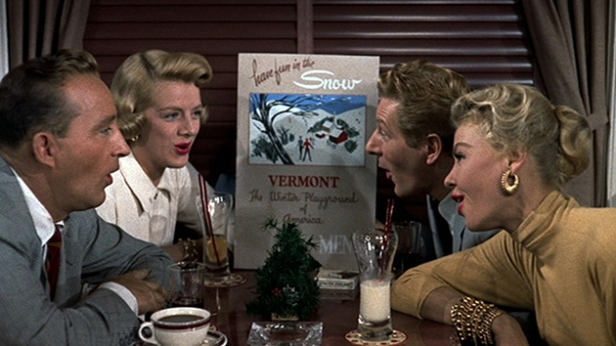 For a film whose primary goal is to create lasting, catchy melodies through song, White Christmas all but fails. Each number – bar the nominal, highly acclaimed and instantly recognisable song – is complete rubbish. The only song that is slightly memorable is ‘Sisters’ due to its repetition, and ‘Snow’ for its poorly constructed refrain that’s as woeful as it is insipid (“Snow / I want to wash my hands, my face and hair with snow / Snow”) They’re not catchy, not even in the moment, so each punctuating song brings the pacing to a screeching, tap-dancing halt, and that’s not something that any musical should be. The fact that the rest is so good is even more of a disappointment, and I’d rather have seen the film without these distracting interludes.

Though White Christmas‘s heart is in the right place, as a musical, it’s largely ineffective, suffering from an awkward discordance as it hesitates from tune to tune. The plot is paper-thin, and the songs don’t adequately bridge the narrative gap to make this shallowness something that can be overlooked. I can fully understand why it has become a staple in so many households, but aside for the magnificent script and some delightfully warm, inviting sets and costumes, it didn’t do much else to win me over. It also failed to put me in the Christmas spirit, which, as a film that’s been doing the rounds for half a century, is a fundamental flaw that’s hard to forgive.