The last day of this impressively packed film festival was the most relaxed yet, with the latest Christopher Guest mock-doc, Werner Herzog’s take on the enduring influence of the internet, and a return to form from the never-angrier Spike Lee.

Having taken my last night in the city to socialise with my temporary landlords, Day Eleven was unsurprisingly filled with a hangover. That didn’t stop the LFF train, though, as BFI’s handy Digital Library allowed me to watch from home, with an early evening central catch-up to round out the greatest film festival line-up in the UK. 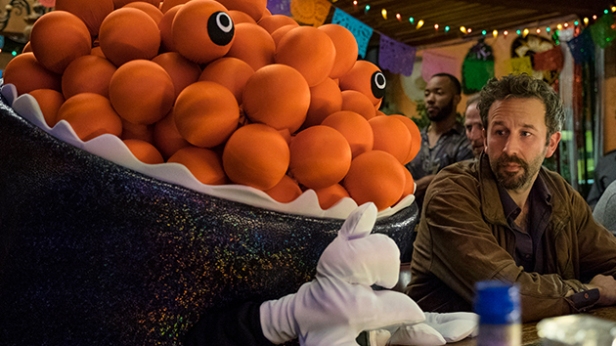 The final day started with Christopher Guest’s Mascots (B-), an off-the-wall mockumentary set in the niche world of competitive mascotry. Starring frequent Guest collaborators Parker Posey, Ed Begley Jr., and Fred Willard, this take on an esoteric subculture delivers amusingly wacky slapstick and quick-witted wordplay, with newcomers Zach Woods, Tom Bennett and Susan Yeagley getting their moments to shine in the lead up to ‘The 8th World Mascot Association Championships’. Following these competitors as they prepare themselves for a series of intricately choreographed routines, Mascots keeps things amusing by awarding equal amount of screen time to those amiable fanatics ,whose speciality is pulling off elaborate dances while dressed as plumbers, robotic armadillos, humanoid fists, and more absurd-yet-plausible outfits. The finale is a gut-busting payoff that pairs ludicrous theatrics with comical sight gags in an entirely expected resolution that keeps itself fresh due to the suitability of costume and performance (a plumber dances around with a giant toilet; a mechanical armadillo grooves to a bizarro version of Laurie Anderson’s ‘O Superman’ etc). It’s not of a similar standard to Guest’s earlier, more complete work, but that’s not a detriment as much as it is fact: since Best in Show or Waiting For Guffman, the footprint of improvisational mock-docs can be seen in multiple films (e.g. Confetti and What We Do in the Shadows) or television (The Office and Parks and Recreation), so while this style of comedy has been oversaturated to some extent in recent years, Guest’s return to what made him a cherished director is playful, congenial and far more welcome than Netflix’s (or rather, Hollywood’s) recent bout of cynical, vulgar comedies.

Were it not for the intonation and rhythm of Werner Herzog’s identifiable diction, Lo and Behold: Reveries of the Connected World (B) might have been a little less interesting than it was. Taking an episodic structure to presenting the case for and against the use of the internet, Herzog’s documentary is largely a failure when considering it as a complete piece of work. Operating in disjointed and frequently digressive scenes of provocative conversation with the likes of doctors, physicists, and victims of online abuse, these anecdotal recitals of how the virtual world has affected everything in our daily lives are primarily intriguing, if sporadically so. In the screen talk that I saw prior to this, Herzog spoke extensively about his relationship with YouTube (for his texting and driving docu-short: From One Second to the Next) and how it was to create something for a platform different to what he was used to. In this way, perhaps Lo and Behold would have benefitted from being split into the ten short films that it consists of, thereby maintaining a comprehensive focus on the specific story within each. As it is, these broad strokes through differing stories can feel unexplored, spending too little time with some of the subjects that he interviews. Regardless of these transitory, jumbled shorts, there were very few dull moments, mostly due to Herzog’s sudden interjections, supplying the film with insightfully fresh proverbs from a man whose whole life seems to be full of them.

It’s been 14 years since Spike Lee last impressed, and here he returns to his irascible self with the politically charged adaptation of Greek comedy Lysistrata: Chi-Raq (B). An alarm-ringing, siren-blaring, hip-hop musical that’s as vital as it is angry, Lee has created a sort-of free-form improvisational jazz dramedy: tonally impenetrable and technically chaotic, it’s still a strangely irresistible, eloquent mess that’s smart, modern, and seriously pissed. Taking place in modern day Chicago instead of during the 1st Century Peloponnesian War, and utilising rap verse as a substitute to Greek prose, Lee’s adaptation finds its voice at an unnaturally quick speed, opening with a bitter rant in the form of Nick Cannon’s ‘Pray 4 My City’ playing out in full as stark red lyrics on a black screen. It’s a protracted opening, but one that establishes Lee’s determination in not giving in to subtlety: the statements he’s making are far too important for that. It’s an incendiary look into a civil war between Chicagoans that’s fiercely funny and seductive, and while it’s lengthy and disproportionate at times, it’s still an original, argumentative take on an oft-reiterated problem facing predominantly black culture.

30 films, 2 screen talks, 4 experimental shows, and a handful of Q&A’s later, BFI’s 60th London Film Festival is over, and what an unbelievably fantastic week it was. Coming later this week will be a full recap of the highs and lows of the festival, with a personal awards feature to follow. It’s been an absolute pleasure, with a big shout out to the cinemas involved (specifically those I attended: Picturehouse Central, The Prince Charles Cinema, Embankment Garden Cinema, NFT1 and Odeon Leicester Square); the welcoming and hard-working BFI volunteers and programmers; my parents (without whose help I wouldn’t have been able to attend); Mr. Vickery and Mr. Osaer for providing me with a comfortable sofa to rest on, and cal.con for the daily illustrations that gave my site a much needed aesthetical boost.

Most importantly, though, is each and every one of you who read, liked or shared my coverage. It was an exhausting eleven days made all the more rewarding by your feedback.