Much like any tent-pole Marvel release, the X-Men franchise has never been something that I’ve been charmed with as nearly everyone else seems to have been. I loved X2‘s Oval Office opening and its dam-busting finale, but there’s not been an entry in the 13 years since that has won me over, neither with the X-Men themselves, or the dreary Wolverine spin-offs. The Last Stand was a staggering flop, First Class was a diverting, if humdrum, piece of reboot cinema and Days of Future Past was a calamitous, lazy waste that I took little enjoyment from. For me, Apocalypse was easily the peak of the (second) trilogy. It’s no better than First Class and it’s no worse than Days of Future Past: it’s as flawed and clumsy as the rest of them, but also the one fully embracing of its cartoonish theatrics, and that alone made it more gratifying.

This isn’t a glowing review, and although my expectations were tempered to loathe it after a decade of dismal entries, I still feel indifferent towards it. As fully expected, the stakes are much, much higher in Apocalypse. Ten years after the showdown at the White House, Charles Xavier (James McAvoy) and Erik Lehnsherr (Michael Fassbender) are living their separate lives: the former as the head of Xavier’s Institute for Higher Learning (formerly Xavier’s School for Gifted Youngsters) and the latter seeking an honest life with a new family and a job in a Polish foundry. Through external, but no less preventable forces, both lose their livelihood’s once again forcing them back into yet another head-to-head battle in a war between human- and mutant-kind. This time, however, it’s a centuries-old mutant – En Sabah Nur – that’s declared their core antagonist, threatening to bring about that which his Western name indicates: the Apocalypse.

Played with vaudevillian verve by Oscar Isaac, Apocalypse is a world wrecking mutant the likes of which the X-Men have never seen. This upgrading from ‘American’ to ‘Global’ on the peril scale is significantly higher and more interesting, as it means that their final scuffle needs more of a group effort to best him. The opening slave retaliation in Egypt was a fast-paced and violent introduction to the titular villain and his Four Horsemen (who were so much more threatening and tenacious than their 1983 counterparts), and the finale was a well choreographic and even-handed confrontation, with each of Apocalypse’s contemporary Horsemen combating against Professor X and his own. These two scenes are admirably staged to allow you to discern who was where without it feeling too turn-based, even if, on face-value, that’s exactly what it was.

Overlooking these grandiose action moments, there’s a lot to dislike. It’s an absolute mess of a screenplay, and Singer has proved time and again that he’s simply not a good storyteller. Irritatingly, it’s another film that has numerous redundant origin stories, this time exhausting the talents of the largely brilliant cast of youngsters. Simon Kinberg and the team have given them so little to work with that once they’re introduced, they just float around in the ether, doing little to forward the momentum unless their specific ability is called upon. But the weariness doesn’t come all from the young cast: there’s a distinct lack of enthusiasm for most of the returning adults too. Nicolas Hoult is his usually banal self as the cobalt-covered Hank McCoy, and Jennifer Lawrence essentially sleepwalks through her entire arc with an apathy that bleeds from every line uttered. It’s only Quicksilver (Evan Peters) and Cyclops (Tye Sheridan) that seem like they’re having fun, and they’re still horribly unwritten. In fact, without the veteran actors, the film would be void of detectable talent: Fassbender’s early scenes teem with a pathos for his characters’ hopeful new life, and Isaac brings a sense of anarchic pleasure to his role despite having paper-thin motivation for all-out destruction. 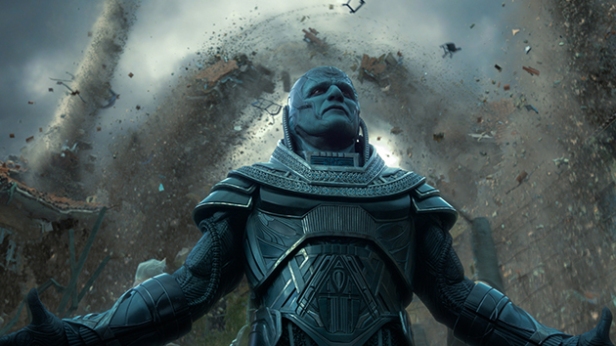 As with the entire series, Singer can’t seem to shake the concept of including a thunderingly dull take on social commentaries, and though it lessens some of these recurring, ham-fisted motifs, it’s still apparent in the quieter, more melodramatic minutes. His single-minded sense of social consciousness thankfully seems to be diminishing, and this suits its theatrical gloominess far better. Let’s hope the next (if there has to be one) will include even less.

X-Men: Apocalypse is a repetitive mess with close-to-zero propulsion, and though the threat is much more palpable this time around (perhaps due to Mystique’s infuriatingly monotonous stealth from Days of Future Past being all but absent), its brazen comic goofiness is a welcome break from Marvel’s wearisome austerity. Even if it’s far too bloated and boring for it to be much different to its predecessors, it’s still ambitiously entertaining in fits and starts from the messy beginning, to the even messier end.