With an unforgettably grotesque high-concept, Ben Aston’s He Took His Skin Off For Me is one of the most literal and accomplished horror shorts I’ve seen in a long time. By adhering to its own grisly idea and unique angle on the relationship drama, it succeeds at each slight turn with a sympathetic and surreal take on modifying oneself for love.

The decision to start the ten minute short with titular moment was a smart one. When representing the title from the first minute, the focus was driven away from this act of self-improvement and toward the repercussions within the semi-detached apartment. Another smart move was to use narration in lieu of in-scene conversation: Her (Anna Maguires) takes us through her emotions as a stay-at-home girlfriend, her daily chores of cleaning sheets and scrubbing bloody footprints taking over her life entirely. We don’t know Her before the incident, and yet we get the sense that she didn’t so much harass Him (Sebastian Armesto) to remove his outer-self, the final choice was to be his own: an unspeakable development in their relationship to prove his love for her. Her narration speaks volumes about their relationship, and the rest is filled in by loving glances and slight, affectionate touches.

As someone who has become accustomed to viscera and bored by most forms of on-screen violence, He Took His Skin Off For Me surprised me in how much it made me wince. Even during scene-establishing shots of the apartment, the implications that went unsaid have stayed with me for days: a bloody hand squeaking up a bannister; a skinless man walking in rubber shoes; or even the thought of synthetic materials rubbing against a full-bodied open wound was repugnant enough to garner truthful compassion when he paws at his old, putrifying birthday suit in his closet.

The way in which Aston delivers his message is something brilliant: there are things that you do in a relationship that you may feel uncomfortable with, but you do them to sacrifice your private beliefs in order to align with your partner. The tacit understanding that Him is closed-off and emotionally stunted at this point in the relationship forces him to strip bare and uncover his emotions, expressing his love in the most physically manifesting way possible. Over time this act of personal transformation would slowly go unnoticed and become as commonplace as it was before the alteration, and the implication is there to the final second: would you change yourself to fit with your partner’s change, thereby belittling their decision by becoming the same (i.e. both skinless)? or would you deal with the potential fallout of this sudden difference in personality whilst you stayed the same? These questions are asked in the moment, and Aston has shown these answers as a physical demonstration that the character’s would find close to impossible to reverse. (There’s also a level of ambiguity here that this could simply be a visual representation of a smaller change, but this does little to derail the story.) 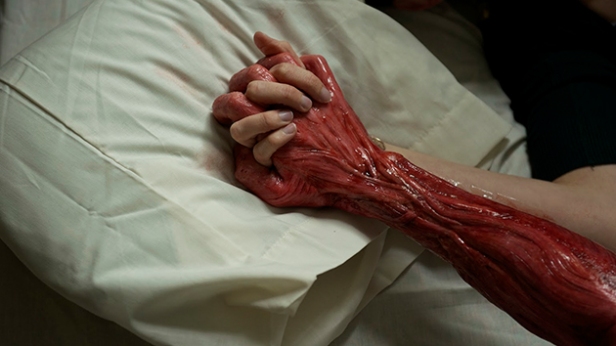 Yiannis Manolopoulos’s cinematography is terrific, telling more of the story than has been said through narration, and though his use of dutch angles to establish disharmony in the relationship is a little distracting, every other technical flourish is done with great judgment and respect for the visual narrative. In the end, Aston’s short film is nothing less than a terrific achievement in literal storytelling, bolstered by seriously astonishing make-up effects and a dreamlike quality that can often be hard to maintain in such a short runtime.

Watch He Took His Skin Off For Me on Vimeo.
Watch the Behind the Scenes video here.

One thought on “Review: He Took His Skin Off For Me”