There was a sensation of glee that I felt when watching Deadpool, and that can accurately be described as the feeling of schadenfreude. Knowing that the majority of cinemagoers were repulsed and offended by Tim Miller’s not-at-all-suitable for children R-rated Marvel Universe movie made me enjoy the headshots, the profanity and the fourth-wall-breaking ‘fuck-you!’s that the film was littered with.

It’s a surprise to me that I enjoyed it as much as I did. This is possibly down to it being not nearly as annoying or self-referential as I was lead to believe, so bracing myself to be irritated meant the abundance of ballsy one-liners was lessened. At times, there were one-too-many references, quips and in-jokes within a single scene that the success of those that raised a chuckle were depreciated, so maybe it’d have been preferable if there were more focus in order to allow those that landed successfully to breathe fully. But y’know, comedy is subjective and all so which jokes to remove would be hard to determine, though a few of the dick-jokes could’ve been excised entirely and no one would’ve been the wiser. 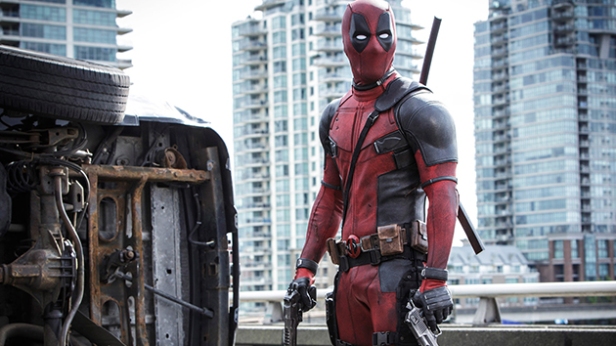 Ryan Reynolds is as charismatic as he has ever been, playing his second (unmistakably better) incarnation of Deadpool and was probably the best casting I could have envisioned for the role. I’ve never read the Deadpool comics (or really, any comics for that matter) but his charm and wit felt like it was well suited to the type of character he was adapting to. The rest of the cast however were – although not intolerable – pretty poor. Aside from the satisfaction I got from seeing T. J. Miller again (y’all best be watching Silicon Valley), Ed Skrein was a tremendously lifeless villain, struggling his way through every scene he was in as unsuccessfully as he grappled the hammy melodrama of his very brief stint on Game of Thrones. But it wasn’t just him: Gina Carano continues her downward streak of film roles that began so promisingly with Haywire, Morena Baccarin didn’t bring anything of interest to her furniture of a role, and the two X-Men (that they could afford) were certainly more annoying than Deadpool himself.

It’s refreshing to see such a violent, no-nonsense superhero blockbuster play with the format, but that absolutely doesn’t mean that all superhero films from now on need be ultra-violent and sweary to be a success. It works for Deadpool because of the character, yet it would be an embarrassing misstep if they were to adopt this visually and thematically maturer approach to, say, Ant-Man or Thor. Don’t be confused: that’s not saying Deadpool is mature, in fact it thrives on its immaturity.

As someone who pretty much loathes the superhero genre –Deadpool joins Iron Man 3 as a preference over The Avengers (or their individual titles). It’s not a perfect film, it’s not even a great film in some stretches, but I’d most certainly like to see more like this that isn’t worried about taking a risk in alienating and antagonising audiences. That’s why I liked Iron Man 3, and that’s why I liked Deadpool.

Juice Newton – Angel of the Morning

I mean, it had to be this track, didn’t it? Set to the opening tableau of vehicular destruction, the credits were the perfect way to introduce the flippant and jocular tone, made all the better by this classic 1906s pop ditty. The lyrics themselves also highlight the tongue-in-cheek behaviour, signifying Deadpool as the ‘Angel’ of the film (of which he most certainly anything but).