The opening of this review comes with a caveat: aside from Reservoir Dogs and Jackie Brown (yeah, I purposefully excluded Pulp Fiction, so fight me already) I would not say I’m a fan of Tarantino’s hyper-violent wordsmithery. This introduction is written at 18:45 on 11th March 2016, a few hours before I actually see the 70mm Roadshow version of The Hateful Eight. Just to be clear, I frequently try to avoid judging a film based on the director’s previous work, but I find it nigh-on impossible to do so with ol’ QT.

*I still maintain that the opening to Inglourious Basterds is the best scene that Tarantino has ever done and that Death Proof is an absolute failure on every level (but that crosses over to another cinematic dislike of mine: the revival of grindhouse), so perhaps QT will forever remain a director who is out-of-reach.

Well, it was good for a while.

I’d like to exit a Tarantino film and be enthused about the entire film, and not just choice scenes. But at least this time he was gracious enough to give me Chapters in which to identify every moment of its bloated running time that I didn’t connect with at all.

The film is divided into two very distinct halves of three chapters each that is indicative of the bulk of Tarantino’s releases: the first being the groundwork delivered with bombastic and electric dialogue, and the second being the undoing of this with over-the-top viscera and gore. It’s clear which half I preferred. 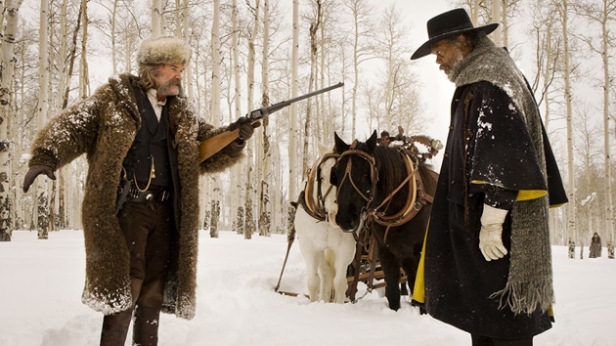 The first half is certainly more entertaining; sharp lines delivered with gusto from Tarantino alumnus Samuel L. Jackson and Tim Roth, but the entire film is the command of the superb Walton Goggins who finally gets his due as a leading man in spite of a cast generous enough to be given a balanced amount of screen-time (though that can’t be said for the fair amount of conversation as some members are reduced to paper-thin soundbites). His delivery and timing holds the right amount of levity to a film which is mostly a tough time: the monotonous themes of racism; an engaging story that typically devolved into that of rape; and the genuine mistrust of women, all gladly broken by a quick turn of that Goggins charm. It’s not to say that the racism and sexism were a problem for me as they both fit within the context of the period in which its set, but more a problem for me in that there doesn’t seem to be a film that goes by that Tarantino can’t reign it in.

Speaking of these extended moments of dialogue – and there are a lot – Tarantino’s overuse of the shot-reverse-shot technique took me out of most of these one-on-one conversational scenes, some feeling horribly obvious that the two actors were separated by their schedules and it was down to the smart editing to make it feel natural. This is a positive remark for the editing crew, but not so much for the benefit of the tension.

A fourth chapter introduction of a narrator and a fifth chapter introduction of an all-new character literally waiting in the walls were both unwelcome and somewhat dishonest turns. In regards to the latter, the usual attention to detail felt as though it was neglected in favour of a cheap shock, followed almost immediately by the juvenile type of hyper-violence that Tarantino has surprisingly never grown out of, despite visibly growing as a director. I was holding out hope that the narrative nihilism

Disappointingly, the 70mm didn’t do a whole lot for me. The outdoor landscapes looked unmistakably incredible, and a particular panning shot from the stables to the haberdashery under a pink glow was my visual highlight, but there were seldom few moments that begged the necessity of the format, even if the interior scenes were filled with so much to look at.

Ennio Morricone’s score was blistering, probably one of the few unequivocal highlights of the film, but knowing his previous works, that was never up for question. Thought we almost had an entire film without a dumb, concentration breaking contemporary track in The White Stripes. So close.

Much like the door of Minnie’s Haberdashery: The Hateful Eight opens up to the audience with something wild and mysterious, yet Tarantino keeps hammering that door shut with the same shit he’s been doing post-Kill Bill. I’d like to see him utilise these energetic, wordy scenes in a film that doesn’t descend into all-out butchery but rather a softly aggressive resolution, but it seems I’ll be waiting a long, long time for that.