In just two weeks of the new year we’ve had two films showcasing an exhausting dedication to the discipline of which they’re portraying: Ruffalo and Tatum’s physically backbreaking wrestling in Foxcatcher, and now Miles Teller’s astonishingly nimble drumming in Damien Chazelle’s ode to jazz, Whiplash. Both have utilised the skills of the cast to create a bona fide atmosphere of realism in their given field.

Teller plays Andrew Naiman, a meek but driven jazz fanatic who gets plucked from his music class at an illustrious academy by the emotionally manipulative conductor, Terence Fletcher (Simmons). Their relationship is ostensibly a traditional status of mentor and mentee, though it quickly develops away from that as Fletcher’s bombastic insults soon undermine Naiman’s personality and confidence, crushing his spirit with a swift hurl of a stool. Channelling a terrifying mix of R. Lee Ermey’s infamous Sgt. Hartman and our very own vulgar wordsmith Malcolm Tucker, Simmons’ explosive humiliation of his students is at times funny and cruel in equal measure. It’s his put-downs and comebacks that give a much-needed edge to Teller’s timidity. 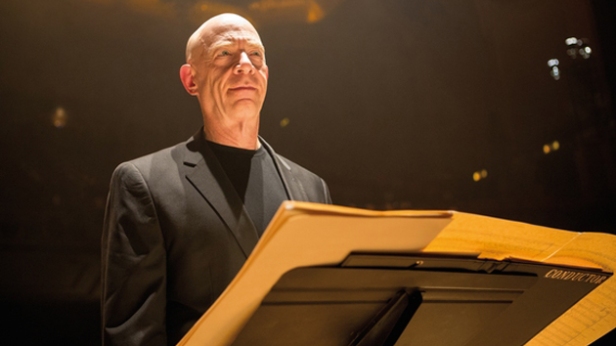 Sadly, it’s in Teller’s Naiman that the film feels out of rhythm. His best instances are always overshadowed by the mighty presence of a bellowing Simmons, whether seeking to keep in time with Fletcher’s tempo, or a cycle of students rapidly trying to outdo one another to gain core status for a forthcoming competition. These shining snippets comes thick and fast: his aptitude for legitimate drumming not once failed to have me grinning in admiration, but it’s the occasions in between that removed me from the moment. I’ve had a fondness for Teller since his newcomer status in John Cameron-Mitchell’s heart-wrenching drama Rabbit Hole, and even more so in James Pondsolt’s beautifully honest The Spectacular Now, but – though the character beats are somewhat well realised – his turn here felt too academic, and too deliberate; I was never fully taken by his on-screen presence as I could always feel his acting.

This issue comes full cycle during a crucial incident, and the choice made by Chazelle felt like the melodramatic, improbable catalyst that could have been resolved any other way than was chosen. The scene (and this is where the remainder of this paragraph will be a spoiler) comes about one hour into the film. The car rental accident defied all logic even in the face of such a steadfast, ambitious character; it was a plainly obvious attempt at wringing tension out of an already uneasy scene. There are a couple of reasons that this is not only a far-fetched regression for Teller’s character, but also for Simmons’: his subsequent reaction to a bloodied, bedraggled and tardy Naiman was an inconceivable oversight from his casually abusive teacher, and his band full of peers who simply didn’t care. 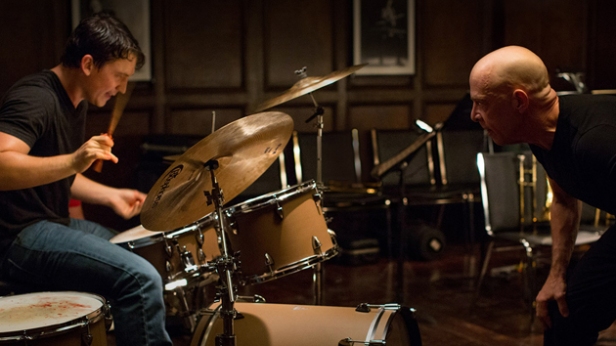 The film rests chiefly on the shoulders of the aforementioned drumming and Simmons’ doggedly aggressive approach to discipline. What could have been a one-note antagonist became something altogether more satisfying, flashes of compassion when interacting with an acquaintance’s young daughter, as well as a particularly effective lie about one of his former students are absolute examples of giving the character depth without heavy fixation. These occasions are necessary, insightful, and thoroughly exploitative, as though we ourselves are sitting in his classroom being deceived, unaware that he could snap at any second.

Whereas most films will build to a tremendous, righteous finale, Whiplash is more interested in beginning with a curtains-down drum-roll (as if it could have started any other way), maintaining a level of anxiety, then bulldozing through to an unforgettably rapturous ending of manipulation, confrontation, and acceptance. It was a worry the film was going to attempt an ambiguous ending, but thankfully the film is able to catch you off guard through to its final minutes, keeping the viewer in a palpable state of agitation. 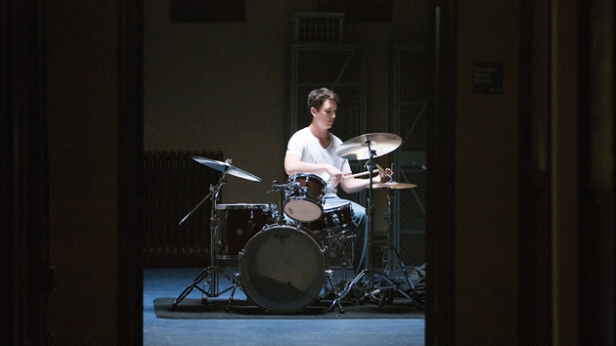 There’s a great deal to enjoy about Whiplash, and whether you believe it’s earned or not, the ending is exhilarating thanks to Teller’s whirlwind drumming and Simmons’ caustic antagonism. Its constant appraisal is not wholly unjustified but in the end it never feels as though it’s anything more than admirably decent.