Originally posted on The 405.

Dealing with the cross-generational complications of a once lustrous hotel in the fictional Republic of Zubrovka, The Grand Budapest Hotel starts in the present, where a teenage girl launches into the memoirs of a character simple credited as The Author (Tom Wilkinson) whom recounts an anecdote of an encounter in the eponymous hotel’s lobby in 1960s between his younger self (Jude Law) and the hotel’s owner in a quest to discover why the Grand Budapest remained open all these years. Cut to 1932: The Author is barely a twinkle in his father’s eye, the hotel is in full, luxurious trade, and M. Gustave (Ralph Fiennes) is introduced as the hotel concierge, irresistible to both the audience and the Grand Budapest’s aging patrons (Tilda Swinton included).

This story-telling approach to the anecdote is a welcome move in Anderson’s roster, allowing room for the nature of imperfectly remembered details, which lends a layer of ambiguous truths to the already appealing crime caper. Did all of these events really take place? Is the film’s hyperactive sensibility told from the point of view of the aged lobby boy? or has the story been misquoted by The Author to promote his own creative nonfiction? It’s a question that permeates the surface, but never detracts from the recital. The film also incorporates Anderson’s now trademark animation, with the cartoonish elements giving perfect homage to the familiar visual novels of the Choose Your Own Adventure series, most notably the ‘Who Killed Harlowe Thrombey?’ murder mystery instalment, with a particularly waggish chase scene down a snowy mountain being a gleeful chapter in a movie filled with them.

The Grand Budapest Hotel isn’t concerned with the intricacies of character like other films in Anderson’s career, but maintains balance in a film that jumps through generations: interweaving an alternative post-World War history and a decades-long love-story to make up for the oft-times shallow but agreeable characters. Incorrectly marketed as an ensemble piece, the film is wholly focused on the two protagonists: M. Gustave and Zero Moustafa (in a revelatory role for newcomer Tony Revolori), with the large name cast thrust into the background in order for our two heroes’ relationship to flourish; Fiennes’ eruptive manner bouncing off Zero’s laconic-yet-learned lobby boy yields the most laughs. Anderson regulars are here in force, the majority of them belonging to a collective of cross-European hoteliers known as The Society of the Cross Keys in what is one of many laugh-out-loud moments in it’s brisk 99 minute run-time. 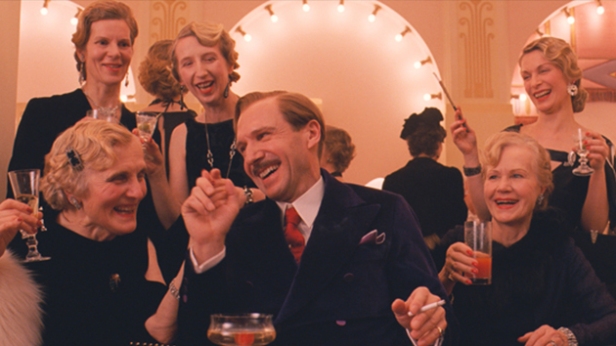 The set design and soundtrack deserve special mention: the directors’ recognisably meticulous compositions, colour schemes and costumes have never been better, especially in the frequently awe-inspiring sets ranging from the aforementioned hotel (with both 30s and 60s interiors), snowcapped mountains and labyrinthine mansions, every detail cultivated with such intense scrutiny that every sign, stitch and setting is a wonder to behold. Regular Anderson collaborator Alexandre Desplat is also on tremendous form, concocting a subtle and appropriate soundtrack influenced not by pop-music but instead by buoyant Eastern European folk music.

Exuding a boisterous charm absent from Moonrise Kingdom, Wes Anderson has crafted a strikingly entertaining and personal whodunit-come-love-story, brimming with all the wit and glamour that has become emblematic of the revered director and – at its most basic level – is his most outright satisfying film to date.